As we discussed last week — besides the fundamental economic issues the market is dealing with — the uncertainty around election day and Covid-19 have and will continue to contribute to increased volatility in the short term.

And unfortunately, all three of those issues remain unresolved after election day.

Now, we understand these careful comments may sound odd, considering how buoyant the market was on Tuesday as well as how buoyant the open was on Wednesday. But those big moves actually bolster our cautious outlook.

That’s because bull markets that break to new highs almost always occur with patterns of declining or flat volume as well as small trading ranges.

For example, in the following chart, you can see how even the most recent rally was characterized by falling volatility — as measured by the average true range (ATR) indicator and volume. We will be much more optimistic about a bullish breakout beyond short-term resistance if trading ranges start to decline again. In the meantime, though, we are keeping a close eye on resistance. 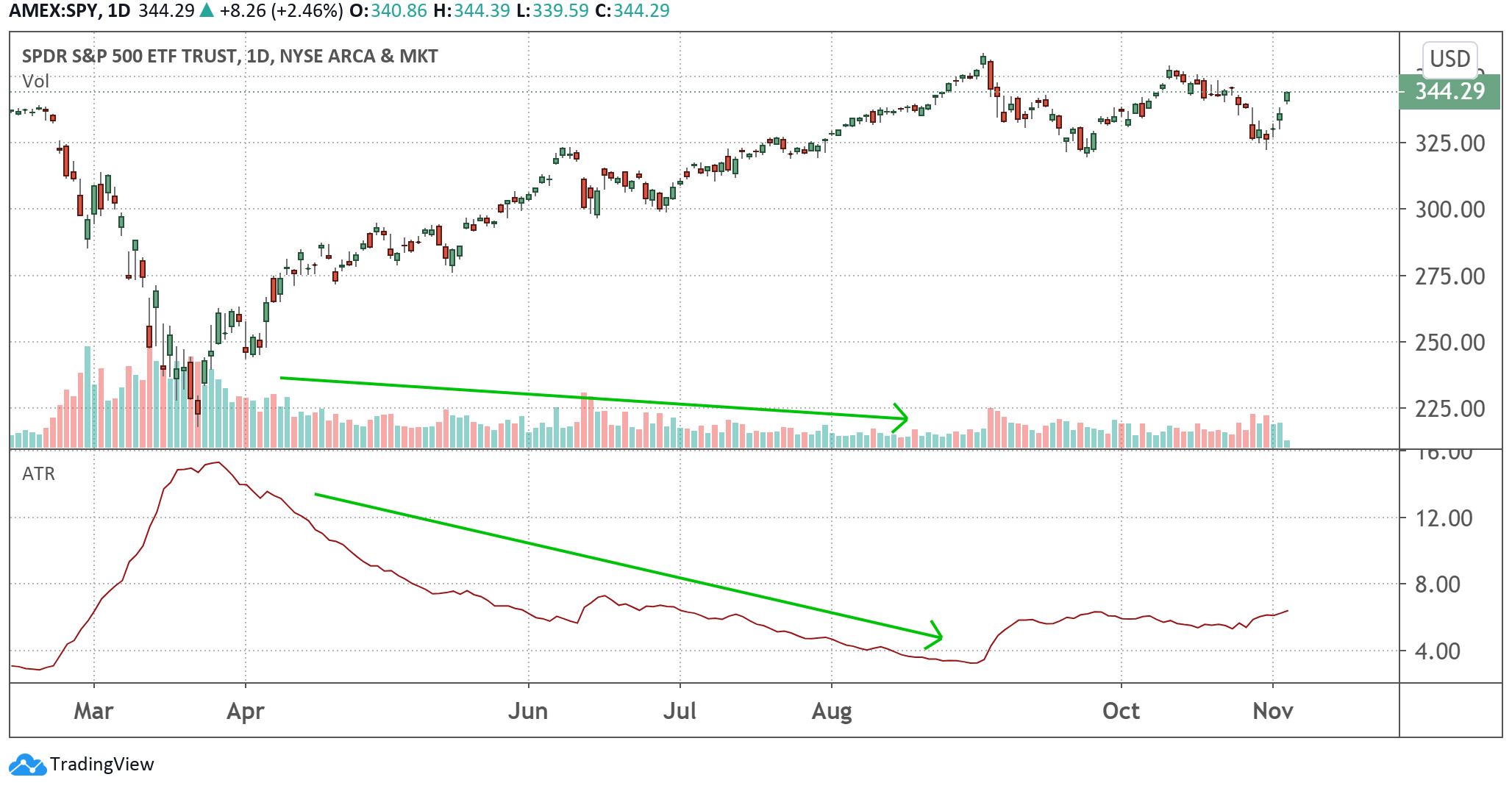 But we don’t expect the election uncertainty itself to last for very long. If the vote counting continues as planned, the country should know which candidate has secured the presidency soon.

That being said, the market was fairly volatile during the election’s overnight session, as investors watched the balance shift between President Donald Trump and former Vice President Joe Biden. Yet it is worth noting that — unlike 2016 — neither outcome seems to have generated any extreme bearishness.

So, if the final election day outcome is likely to be decided in the short term, why should we stay cautious? Besides high levels of volatility, we are concerned with the sudden correlation between government bonds and stocks.

Bond investors tend to have a more reliable handle on risk in the market than stock traders do. So — considering that they are buying up German, Japanese and U.S. government bonds on the same day stocks are rapidly rising — we have to wonder what bond traders know that stock traders don’t.

You can see the last two instances where both bonds and stocks were up significantly on the same day in the following chart. 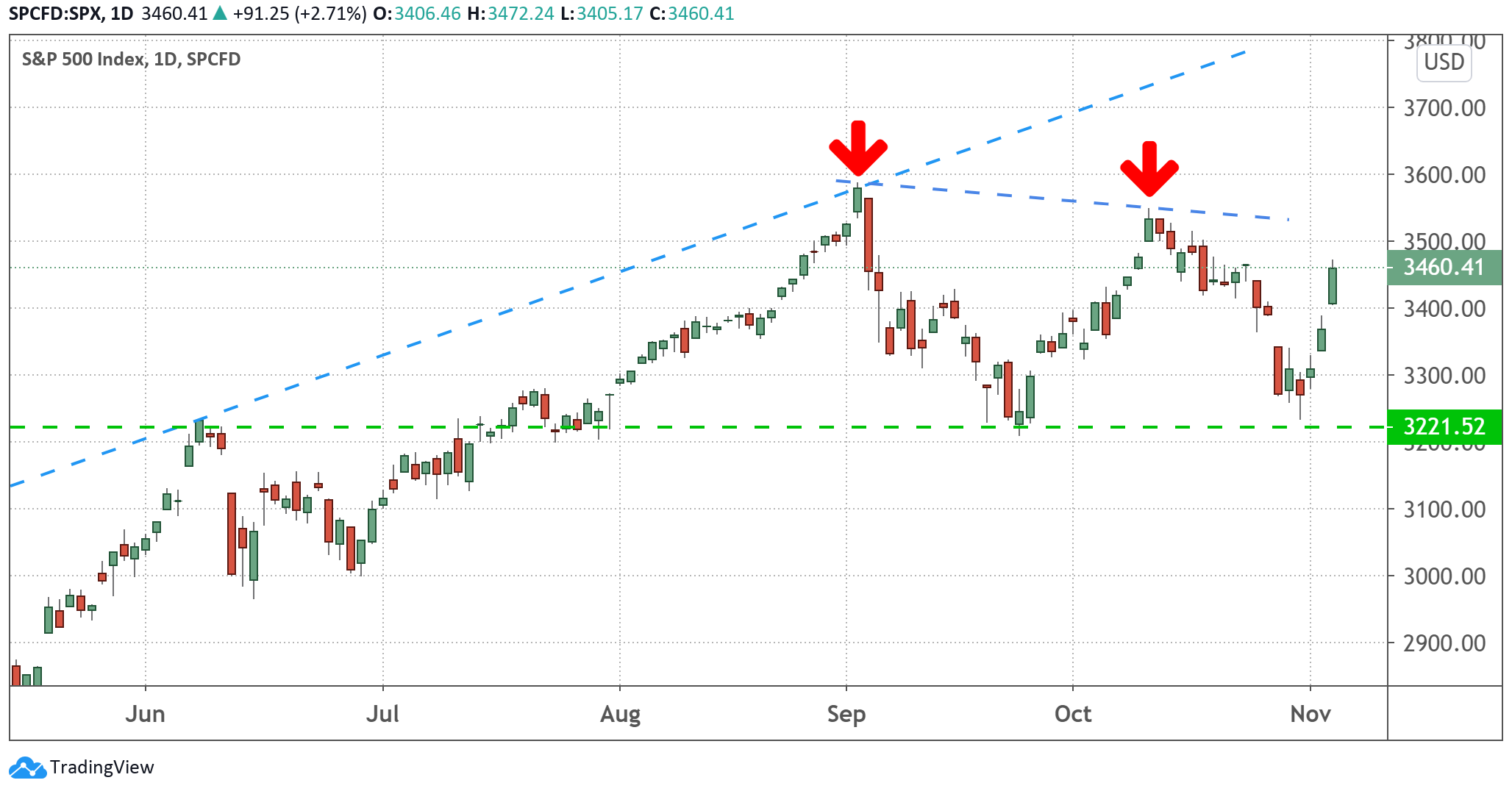 In our studies, a bond-stock correlation has signaled a short-term decline 71% of the time it has appeared over the last 12 years. That’s not the best signal-win ratio, but it’s good enough for us to focus on ramping up income rather than adding more risk to the portfolio.

Love or hate it, it’s also not a stretch for us to say that stocks had previously been rising on the hopes for another round of stimulus between now and January.

However, we think where the “Blue Wave” is lacking in the election reduces the odds of a successful bill. It’s more likely to happen than not, but the probability of a stimulus is not as high as we would have predicted a week ago.

And if a stimulus is not coming — or is much lower than what was originally priced in — we will likely plan to reduce our retail exposure. Similarly, banking stocks will also probably decline as inflation expectations fall.

Of course, these are big “ifs” — but we think this is one of the most important potential spoilers that could send the market lower in the fourth quarter.

The tone of today’s update is still cautious. When it boils down to it, we think the level of uncertainty in the market is high enough to justify a careful approach.

However, we are still bullish overall and don’t recommend increasing any bearish positions yet. While we wait for more election results, we plan to generate more income from our long-stock positions with short calls.

John Jagerson & Wade Hansen are just two guys with a passion for helping investors gain confidence —and make bigger profits with options. In just 15 months, John & Wade achieved an amazing feat: 100 straight winners —making money on every single trade. If that sounds like a good strategy, go here to find out how they did it. John & Wade do not own the aforementioned securities.

25 Tech Stocks to Sell Before They Die
Stocks making the biggest moves after hours: Discover Financial, Alcoa and more
Is META Stock a Buy or Sell? Here’s My Call.
Redditors Didn’t Start the GROM Stock Squeeze. And They Shouldn’t Finish It.
BTC011: Bitcoin & our Financial Advisor w/ Andy Edstrom