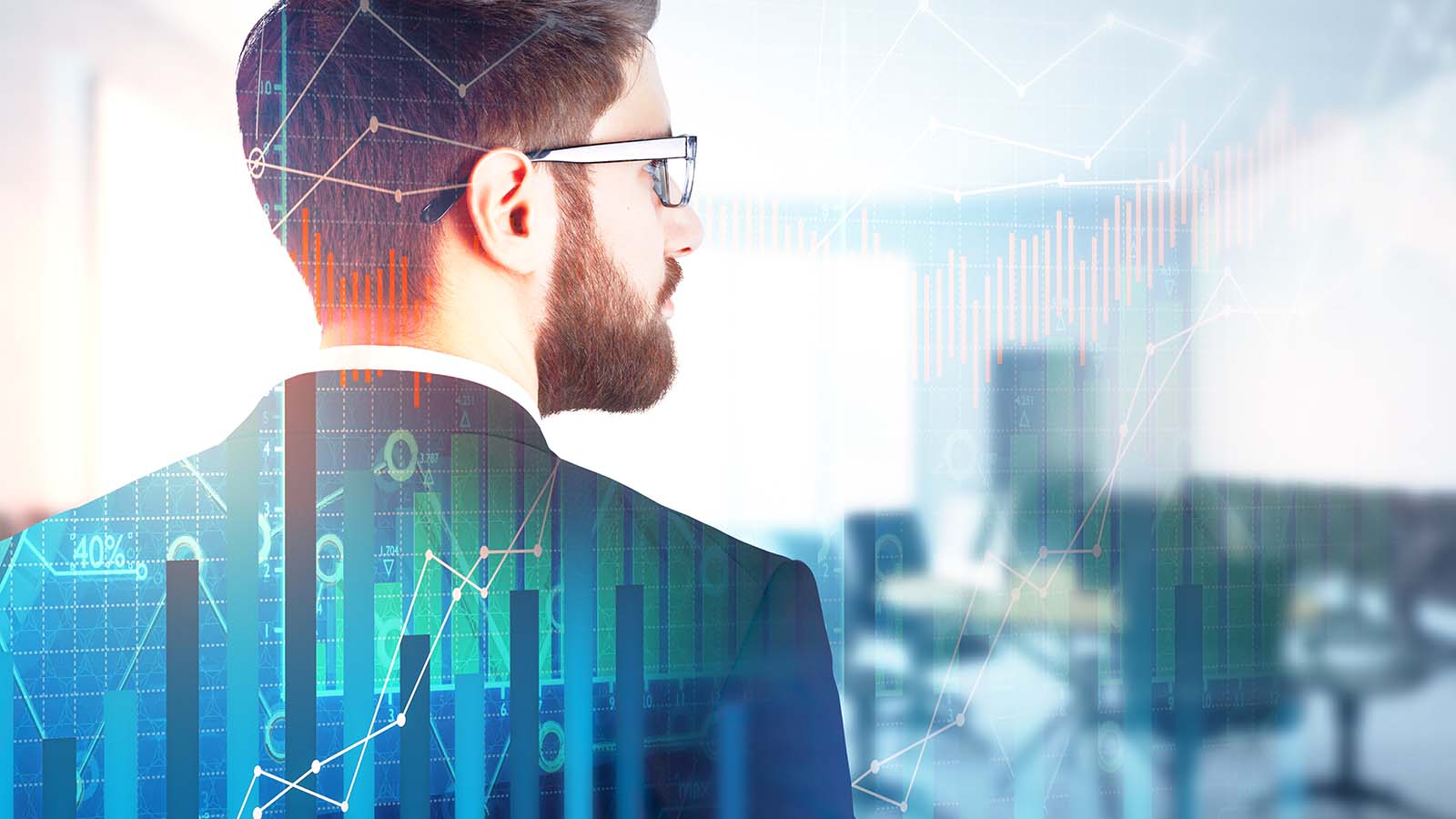 Insider buying can be a bullish signal for a stock. If a stock has made a large move higher and the insiders are buying, it could signal that the rally will continue.

And if the stock has recently had a large drop in price, insider buying could signal that the selloff is over.

When people who have access to confidential information about a company, they are considered insiders. They are typically officers or members of the board of directors of a company. When these people buy or sell their company’s stock, they need to make a public filing with the SEC.

This seeks to prevent the insiders from taking advantage of non-public information. This means we can find out when insiders are buying or selling their company’s stock.

Here are 7 stocks with insider buying this week worth a look:

There are numerous reasons why an insider may sell. They may need to raise money to buy a house or send their kids off to college. But there is only one reason why an insider will buy the stock. They think that it is undervalued and will move higher. 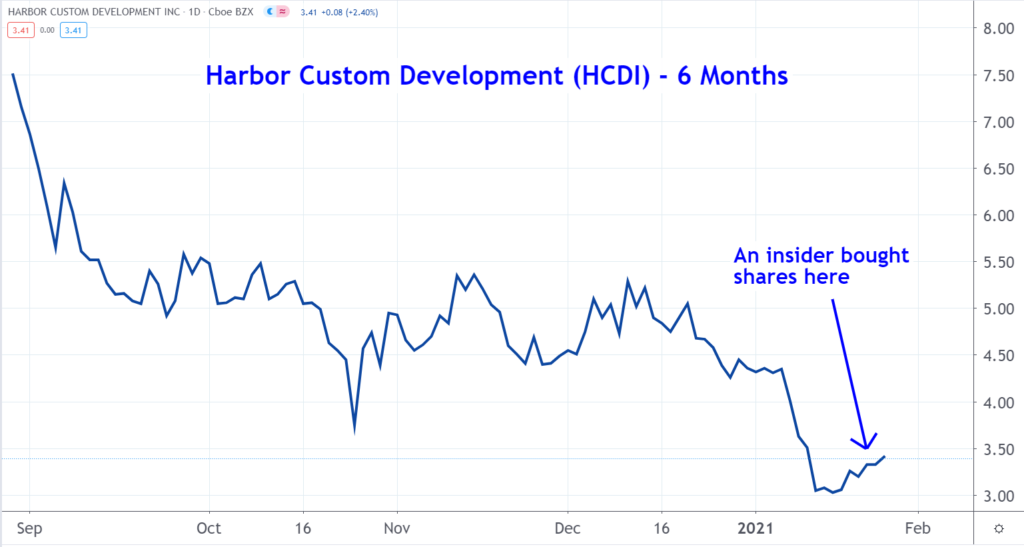 Harbor Custom Development is in the real estate development business and operates in Western Washington’s Puget Sound region. The company’s projects include the development and sale of residential lots, home communities, and single family and multi-family properties.

As you can see on the above chart, shares of HCDI have been pummeled over the past six months.

The company went public in August. The initial public offering price was 1.77 million shares art $6 per share. Stock prices briefly hit $8 the day after the IPO, but since then they have trended significantly lower. The shares are currently trading around $3.50.

However, that painful decline may finally be over. On January 15, the company offered an additional eight million shares to the public at $3 per share.

The company’s development director, Larry G. Swets Jr., must believe the stock may be about to rally: he bought 35,000 of these new shares. At $3/share, that’s a personal investment of $105,000. 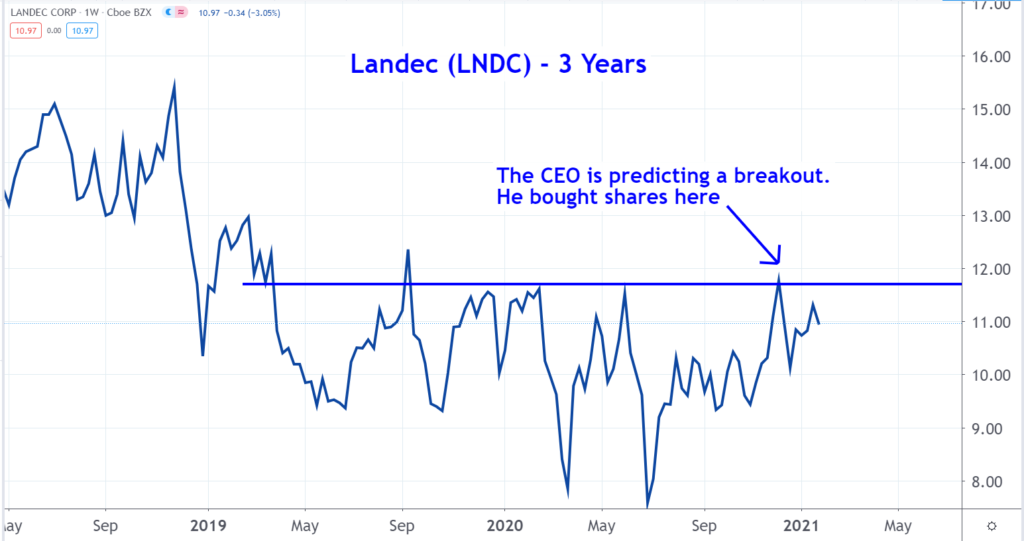 As you can see on the price chart, there has been serious resistance for LNDC around the $11.50 level. This is the blue, horizontal line. Since last May, each time the stock reached these levels the sellers came into the market and knocked it back down.

But now Landec may be about to break out above this level. If it happens, it will be an indication that the sellers who created the resistance have finished their orders and left the market. This will set the stage for the stock to rally higher. 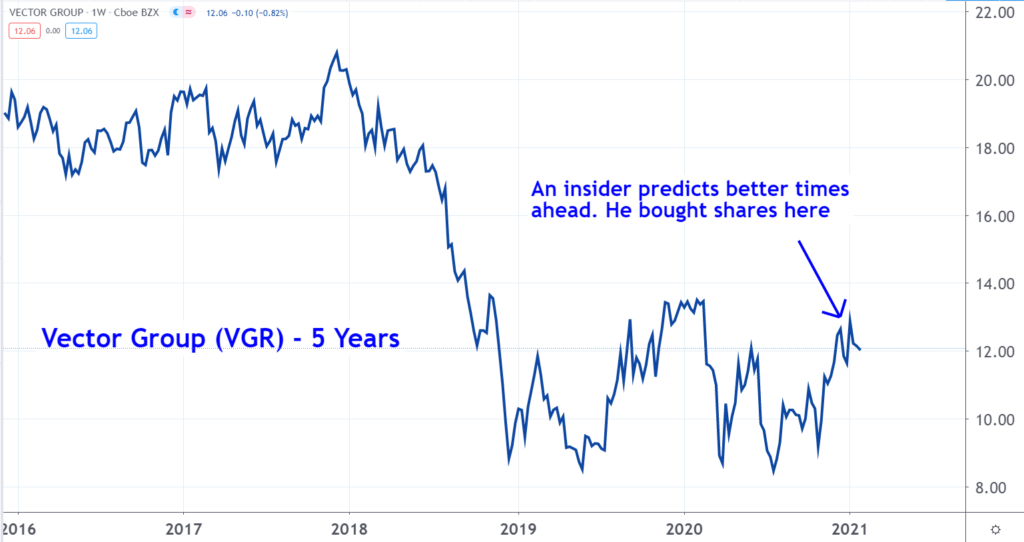 As you can see on the about chart, over the past five years shareholders of Vector haven’t done so well. From late 2015 through early 2018, the stock traded sideways between $18 and $20. This happened while the rest of the stock market was moving higher. And since then, shares of Vector have been in a long, slow decline.

But at least one director thinks that things may be about to turn around. Richard Lampen is the company’s new chief operating officer and he just reported making a personal investment of more than $180,000.  On January 15 he paid $12.10 per share for 15,000 shares. 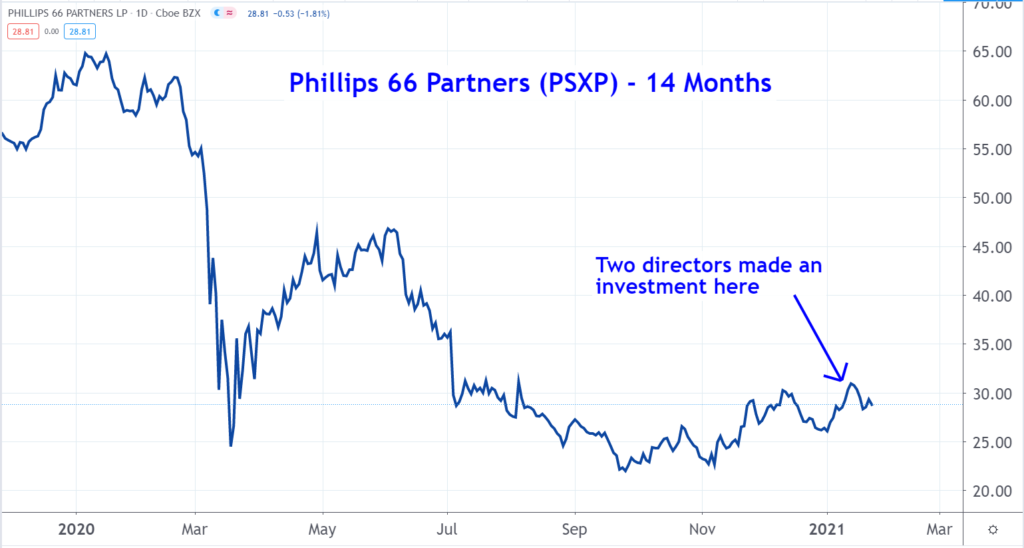 Phillips 66 Partners LP is in the oil and natural business. It offers its customers transportation, processing and storage services for petroleum products and natural gas liquids.

A year ago, shares of PSXP traded for more than $60 per share. Now they trade for less than $30.

But things have been turning around in the energy market. Since early November, fears of the United States losing its energy independence have driven the price of crude oil from $36 to $52 per barrel. This is an increase of about 45% in less than three months.

When the price of oil increases, companies in this business become more profitable because they can sell their goods for a higher price.

Two directors at Phillips must believe that the stock price will turn around. On January 15, Mark Haney and Phillip David Barrington each reported buying 1,445 shares at an average price of $30.055. 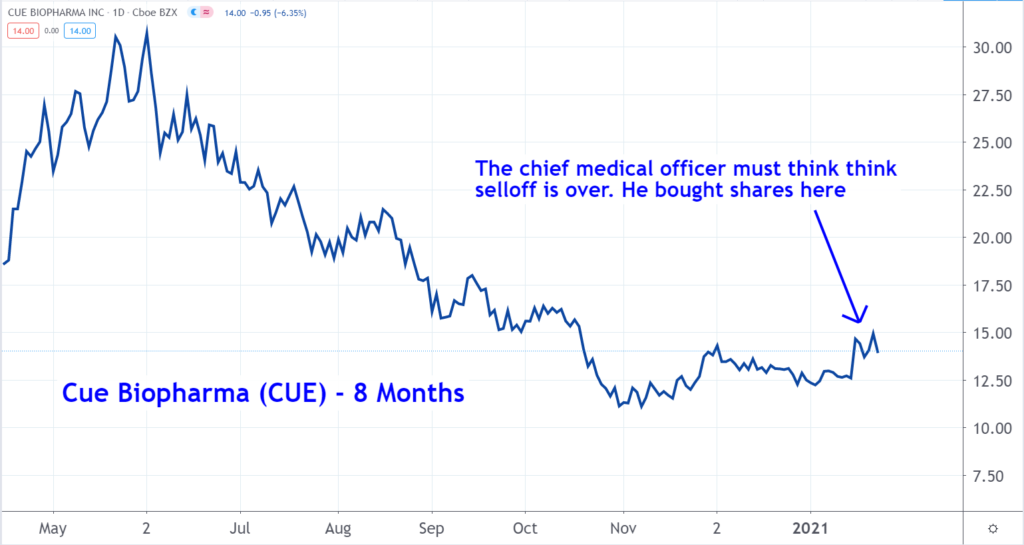 Cue Biopharma is a biopharmaceutical company. It develops drugs to treat a wide range of cancers, chronic infectious diseases, and autoimmune disorders. The company was founded in 2014 and is based in Cambridge, Massachusetts.

As you can see of the above chart, shareholders have lost a lot of money. Over the past eight months the share price of CUE has been crushed. It has dropped by more than 50%. Last June, shares of CUE reached levels over $30. Now they are trading for less than $15.

But there is at least one insider who must believe this selloff may finally be coming to an end. 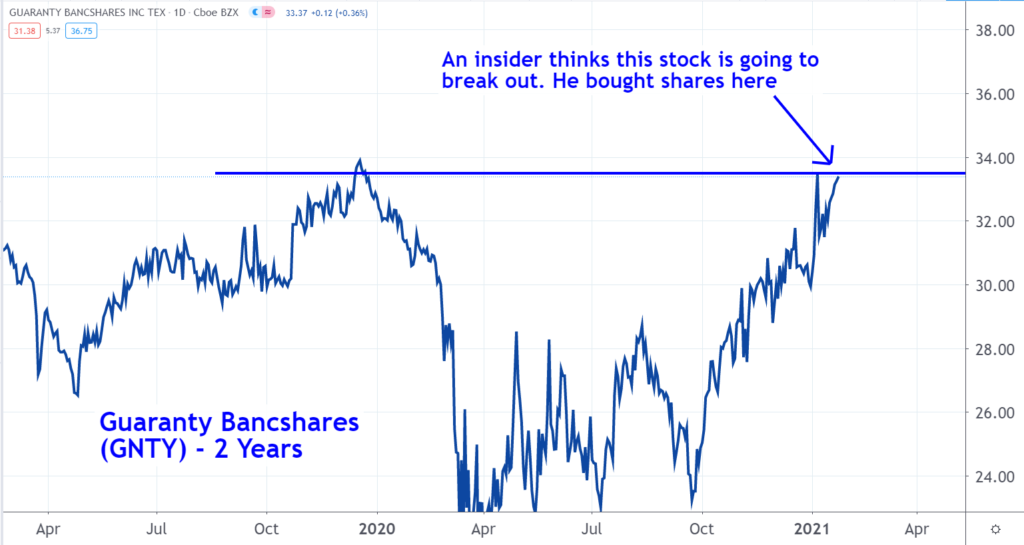 Guaranty Bancshares is a bank holding company that provides a wide range of commercial and consumer banking products and services. Its customers include small and medium-sized businesses, professionals and individuals.

When this happened last time, a large selloff followed. The share price dropped to $21 in March of 2021. They have since recovered and are now at the resistance level once again.

There’s at least one insider who believes that shares of GNTY will break through the resistance level to move higher. 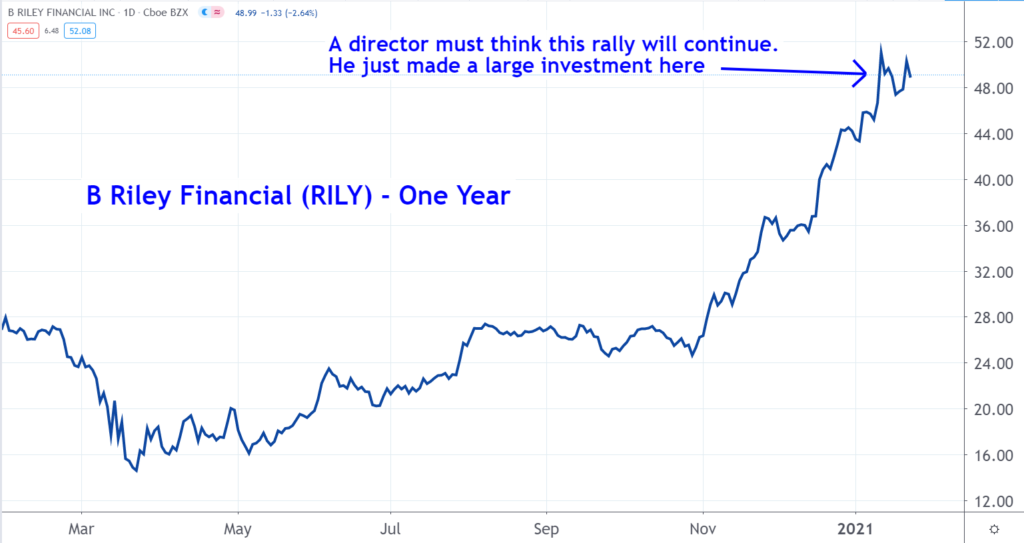 As you can see on the above chart, over the past year shareholders of this company have done very well. After reaching levels around $15 last March, shares have ripped higher, currently trading around the $48 level.

At the time of this publication, Mark Putrino did not have any positions (directly or indirectly) in any of the aforementioned securities.