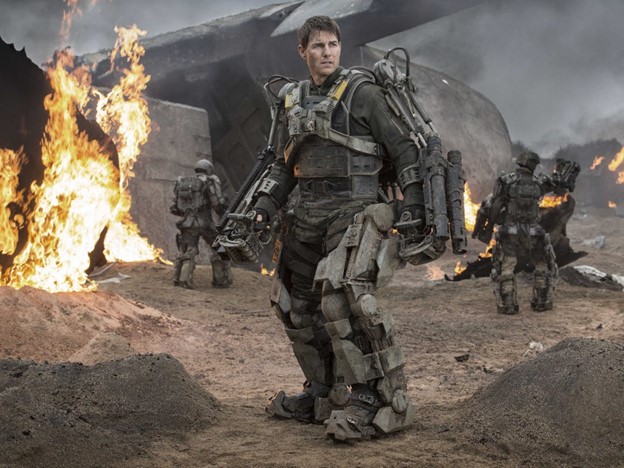 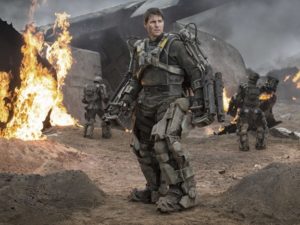 Great flick. If you haven’t seen it and are into science fiction movies, I highly recommend giving it a watch.

In any event, the movie centers around Cruise playing a solider who uses a supercharged, futuristic military exoskeleton to help fight off an invading alien army.

But what if this technology existed in the world today?

As longtime readers know, some of the best investment opportunities in the market emerge when science fiction turns into reality.

See self-driving cars. For decades, autonomous vehicles were the stuff of science fiction lore. Now, thanks to rapid improvements in sensor technology and falling sensor manufacturing costs, they’re on the cusp of turning into a reality. Companies helping bring AVs to life – like leading LiDAR maker Luminar Technologies (NASDAQ:LAZR) – have been big winners on Wall Street.

Or, see genomic editing. The idea of editing genes is not new. But it was forever implausible. Until 2012, when the invention of CRISPR-Cas9 systems made gene editing possible at scale. Since then, the genomic editing space has been on fire, and many of the world’s leading gene editors – like Editas Medicine (NASDAQ:EDIT) – have been some of the biggest winners on Wall Street.

You could also point to the space tourism industry and Virgin Galactic (NYSE:SPCE), or the artificial intelligence space and C3.ai (NYSE:AI), or the electric vehicle space and Tesla (NASDAQ:TSLA).

The list goes on and on. The overarching theme is clear.

Today, for the first time ever, many science fiction concepts are turning into disruptive realities, and creating enormous investment opportunities.

One such science fiction concept is the exoskeleton suit from Edge of Tomorrow.

To be clear, we aren’t on the cusp of making superhuman exoskeleton suits to combat an advanced alien army. That’s not happening anytime soon… if ever.

Which stars am I talking about exactly?

In short, all the major hurdles that have stunted exoskeleton adoption are being removed.

For starters, one of the major hurdles to adoption of exoskeleton suits in the medical community has been insurance coverage.

Exoskeleton suits are very, very expensive. Most folks can’t afford them. To buy one, they need help from insurance companies – but insurance companies have thus far failed to provide that help because there has been a dearth of data to prove that exoskeleton suits save on medical costs in the long run (they are relatively new machines, and there aren’t many in circulation).

Exoskeleton suit makers have collected tons of pre-injury and post-exoskeleton data from their machines in use over the past ten years. All of this data is starting to paint a verifiable picture that, indeed, exoskeleton suits result in lifetime medical cost savings.

The result? Insurance companies are starting to provide coverage for exoskeleton suits.

The first domino is falling in Germany, where multiple private and public health insurers expanded coverage to include exoskeleton suits in 2020. The U.S. is following closely behind, as last year, some exoskeleton suits were issued HCPCS codes – or standardized codes that help facilitate the processing of health insurance claims by Medicare and other third-party insurance providers in the U.S. (and are a prerequisite for coverage).

Meanwhile, in the industrial world, exoskeleton adoption has been stunted by the bulkiness of the suits and the huge upfront costs.

But the latest generation of 2020 exoskeleton suits wear more like vests with attachments than full-on suits, while many exoskeleton makers are pivoting into a subscription business model which removes large upfront costs.

To that end, industrial uptake of exoskeleton suits should similarly soar over the next several years thanks to more viable suits and falling costs.

Big picture: after a decade of sluggish growth, the industrial and medical exoskeleton markets are about to sprint into hypergrowth mode.

Which stocks should you buy to play this emerging megatrend?

For the medical angle, ReWalk Robotics (NASDAQ:RWLK) is the best play. This company is the leader in medical exoskeletons and has been leading the charge in winning insurance coverage contracts in Germany.

On the industrial side, Ekso Bionics (NASDAQ:EKSO) is the top play. It’s latest industrial suit, the EVO, represents the most compact, most efficient, and most viable industrial exoskeleton suit in the market today. Plus, the company is leaning heavily into deploying a subscription pricing model for its suits.

Both ReWalk and Ekso have been through tough times over the past few years. But their fortunes are changing. And, over the next few years, I wouldn’t be surprised to see both stocks turn into multi-baggers.