I like a good friendly wager as much as the next guy … and I already won my first bet of 2021!

This wasn’t your typical bet, like whether my Philadelphia Eagles would beat The Washington Football Team last weekend. (Don’t get me started on that one.)

And while I never gamble when it comes to investing, this bet did involve the markets.

I have a pretty good history with those.

In late 2018, I was interviewed on CNN Business and made a rather bold prediction — that the S&P 500 would be up 25% in 2019. The reporter interviewing me, Richard Quest, was skeptical. He bet me dinner on it.

Well, the S&P did indeed gain 25% that year … even more actually.

But I’m still waiting for my dinner.

This latest bet wasn’t with a reporter but a fellow investor … and a legendary one at that. And while I won, so did you and pretty much anyone else who has money invested.

Here’s what I mean …

It was last August that my InvestorPlace colleague Louis Navellier and I made our bet.

Louis bet on the Dow, and I took bitcoin.

But as you can see, the Dow has also done well in that time … up 14% in just five months.

So even though I “won” the bet, anyone investing in good stocks and/or bitcoin should be winning.

I know Louis will honor the payoff. He will donate $5,000 to whatever charity I choose.

But the point I want to make today is that I expect us all to keep winning.

I am highly bullish on stocks this year and this decade. And I am exceptionally bullish on bitcoin, altcoins (cryptocurrencies other than bitcoin), and the blockchain technology on which they are built.

Could it pull back? Of course … and to my mind, any pullbacks should be bought.

This latest push to new highs is being driven by “big money” coming in. Institutions and wealth investors are leading the way, which is different than during the first 10 years of its existence when it was more individuals.

This is significant, because for the last decade cryptos and blockchain were viewed like fantasy internet money.

More than a few folks thought I was crazy, but guess what? Bitcoin topped $40,000 yesterday in a massive run that has it up more than 230% since we made the bet on August 5. 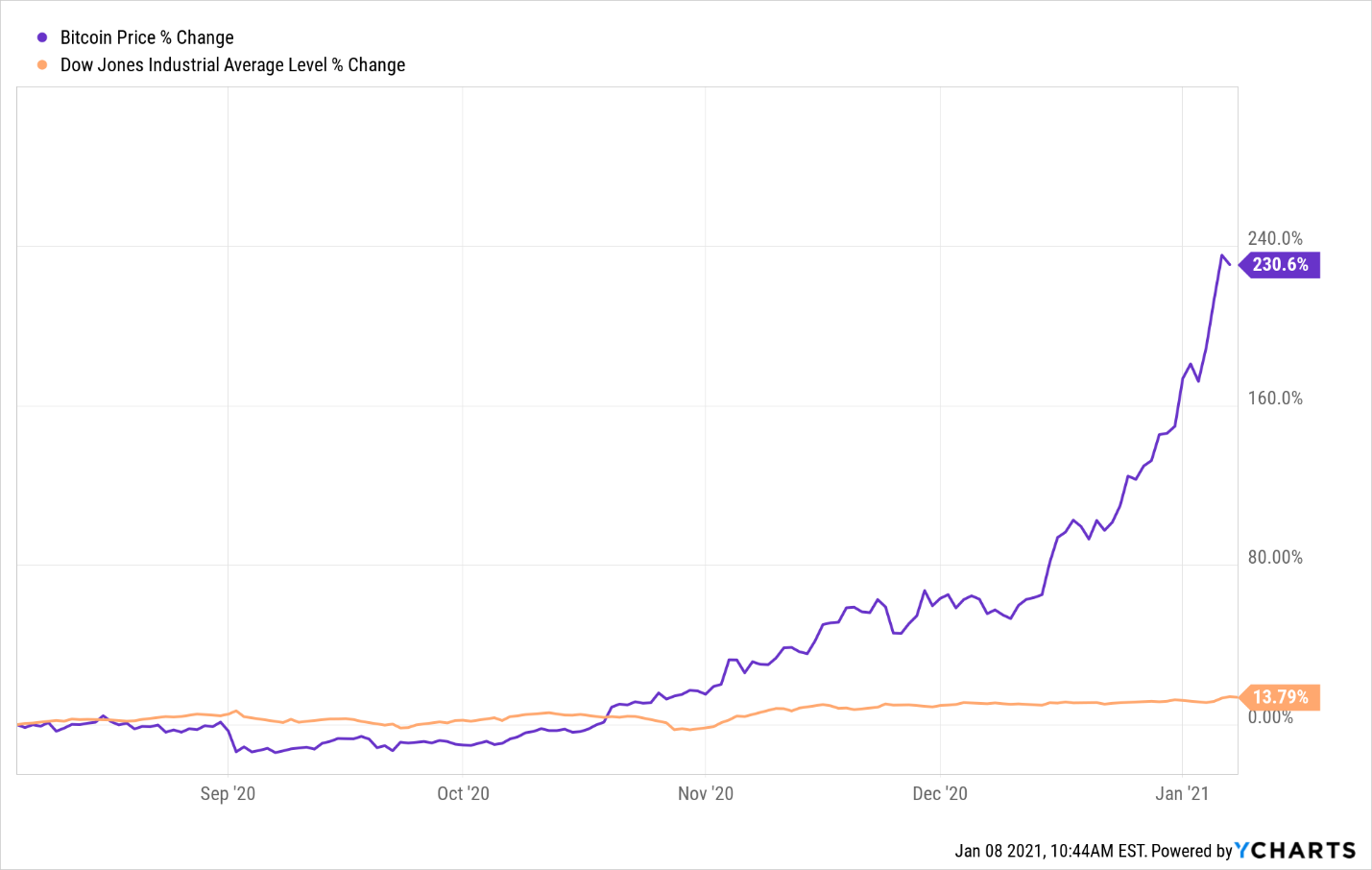 Instead, think of blockchain, bitcoin, and altcoins as revolutionary new software programs that will unleash tsunamis of productivity … and profits.

Cryptos and the blockchain technology they are built on are going to change everything. The way you buy everyday goods and services… purchase a home … pay your taxes … even how you order a pizza.

This transformation is already underway, but the truly seismic shift — when the massive profits are made — is coming as businesses, consumers, and those big-money investors realize what’s going on.

Charlie Shrem, one of the earliest pioneers in cryptocurrencies, and I call this “The Awakening.”

The MORE a technology changes the world for the better, the MORE revenue it will generate, and the BIGGER the gains will be for investors.

That’s why blockchain is going to be so huge. It’s going to touch virtually every industry on Earth.

It is already being used in more and more places all the time, and this massive disruption creates a once-in-a-lifetime financial opportunity for anyone who acts today.

The world’s biggest companies have just kicked off a new battle for crypto supremacy. Businesses like Apple (NASDAQ:AAPL), Microsoft (NASDAQ:MSFT), Alphabet (NASDAQ:GOOGL), Amazon (NASDAQ:AMZN), and Facebook (NASDAQ:FB) are all investing billions of dollars.

A few months ago, Visa (NYSE:V) announced it’s teaming up with a company called BlockFi to offer bitcoin credit card rewards. If you don’t want airline miles, you can get bitcoin.

Wall Street wants in, too. Paul Tudor Jones, one of the most successful and influential investors in history, admitted that he’s a big buyer of bitcoin.

And NFL player Russell Okung is now receiving a portion of his salary — $13 million a year — in bitcoin.

It’s happening. Governments, businesses, and individuals are awakening to blockchain’s transformational impacts, and it could drive the price of bitcoin and select cryptocurrencies to never-before-seen heights.

If you position yourself correctly, it could hand you a fortune that you could only previously dream of.